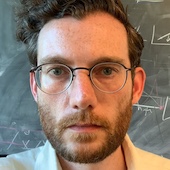 I’m a Professor at the Fred Hutchinson Cancer Research Center in the Vaccine and Infectious Disease Division and the Computational Biology Program, affiliate faculty in the Department of Genome Sciences and the Department of Epidemiology at the University of Washington, and an Investigator at the Howard Hughes Medical Institute.

My research program focuses on using viral genome sequences to understand virus evolution and to gain insight into factors driving viral outbreaks, epidemics and pandemics. Much of this work has been instantiated in the Nextstrain platform to conduct real-time genomic epidemiology and to share results broadly. This platform has seen substantial public health adoption to improve seasonal influenza vaccines, combat Ebola outbreaks and to understand and curb SARS-CoV-2 transmission. More broadly, I’ve sought to progress genomic surveillance and with the Seattle Flu Study, lead the design and implementation of a next-generation infectious disease surveillance system that greatly impacted state and local response to the COVID-19 pandemic.

A Bayesian approach to infer recombination patterns in coronaviruses

Associations between SARS-CoV-2 variants and risk of COVID-19 hospitalization among confirmed cases in Washington State: a retrospective cohort study

Emergence and expansion of SARS-CoV-2 B.1.526 after identification in New York

SARS-CoV-2 variants in patients with immunosuppression

Specific allelic discrimination of N501Y and other SARS-CoV-2 mutations by ddPCR detects B.1.1.7 lineage in Washington State

Integration of genomic sequencing into the response to the Ebola virus outbreak in Nord Kivu, Democratic Republic of the Congo

Characteristics of COVID-19 in homeless shelters: A community-based surveillance study

Evidence for limited early spread of COVID-19 within the United States, January–February 2020

Early detection of Covid-19 through a citywide pandemic surveillance platform

CpG-creating mutations are costly in many human viruses

MERS-CoV spillover at the camel-human interface

Explaining the geographical origins of seasonal influenza A (H3N2)

Quantifying and mitigating the effect of preferential sampling on phylodynamic inference

Genetic diversity and protective efficacy of the RTS,S/AS01 malaria vaccine

Epidemiological and evolutionary analysis of the 2014 Ebola virus outbreak

Canalization of the evolutionary trajectory of the human influenza virus

Strength and tempo of selection revealed in viral gene genealogies

Adaptive impact of the chimeric gene Quetzalcoatl in Drosophila melanogaster

Formation and longevity of chimeric and duplicate genes in Drosophila melanogaster

Overdispersion of the molecular clock: temporal variation of gene-specific substitution rates in Drosophila

Overdispersion of the molecular clock varies between yeast, Drosophila and mammals

Gene conversion as a source of nucleotide diversity in Plasmodium falciparum

cli - The Nextstrain command-line interface (CLI)—a program called nextstrain—which aims to provide a consistent way to run and visualize pathogen builds and access Nextstrain components like Augur and Auspice across computing environments such as Docker, Conda, and AWS Batch.

zika-colombia - Genetic analysis of the Zika epidemic in Colombia

zika-seq - Pipelines to do MinION sequencing of Zika virus

medium-data - Talk on data and visualization

haplotypes - Visualizing evolution as a network of shared mutations

Establishment and spread of Zika in the Americas

Zika in the USVI genome announcement

The Open Science Prize and a shared scientific endeavor

Zika sequencing in Brazil (or Trevor does fieldwork)

On scientific publishing practices in the face of public health crises

Tracking down the sneeze that started seasonal flu

Reassortment between influenza B lineages

Uncovering the "hidden history" of HIV emergence and spread

Molecular evolution of the human B cell repertoire

Reassortment patterns between influenza B lineages

Postdoc in viral phylogenetics and evolution

Visualizing evolution as a network of shared mutations

What limits the rate of virus adaptation?

Comparing performance of Processing.js and D3.js

Running the numbers for Contagion... they don't come out well

Visualizing the global circulation of the human influenza virus

Some thoughts on a GitHub of Science

Canalization of the evolutionary trajectory of the human influenza virus

Strength and tempo of selection revealed in viral gene genealogies

Matching R0 to cumulative prevalence in the H1N1 influenza pandemic

Counting parameters in a phylogeny

Updating coaltrace to use Javascript

Adaptive impact of the chimeric gene Quetzalcoatl in Drosophila melanogaster

Reuters: "Who to blame for flu? Maybe the US, study finds"

Compilation of most interesting Wikipedia articles