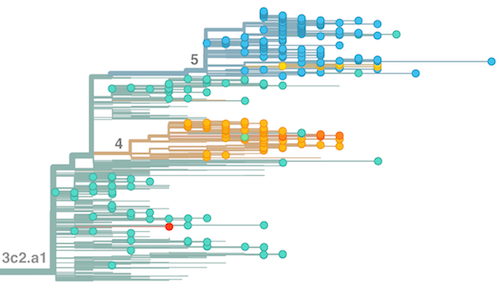 Richard Neher and I have compiled another report on recent patterns of seasonal influenza virus evolution that attempts to project forward to the Northern Hemisphere 2017-2018 and the Southern Hemisphere 2018 flu season. All analyses are based on the nextflu platform.

Here, we see relatively little going on in B/Vic and B/Yam viruses. Both have little genetic or antigenic variation and we expect the current vaccine choice to stay a good match. We observe a near sweep of a new genetic variant of A/H1N1pdm viruses. However, this new variant lacks antigenic differences that would warrant a vaccine update.

There is substantial variation within A/H3N2 viruses. These have continued to diversify and there are now multiple distinct antigenic variants circulating. We identify 5 major clades that are currently vying for dominance. It appears unlikely that a single variant will come to dominate the population in the near future and instead there is likely to be continued circulating diversity. This makes choice of vaccine strain highly difficult; it is not at all obvious that there is better choice than the current A/Hong Kong/4801/2014 vaccine strain.