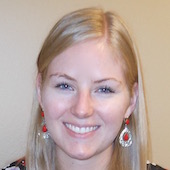 Louise is now an Assistant Professor at the University of Pennsylvania School of Veterinary Medicine.

I am currently a post-doc in the Bedford lab who uses genomics to understand virus emergence and transmission. I received my Bachelor’s degree in biology from Penn State University, and my PhD from the University of Wisconsin-Madison under the direction of Thomas Friedrich. During my PhD, I developed protocols for generating and bioinformatically processing deep sequence data from RNA viruses. We used this data to investigate how RNA viruses evolve within individual hosts, and during transmission between them. I am particularly interested in how viruses adapt to new host species, and the role that transmission bottlenecks play in viral evolution.

I started my post-doc in the Bedford lab in 2017 with the goal of using phylogenetics to trace virus evolution and transmission. I’ve worked on combining genomics data across scales to understand how new mutations are generated during infection and propagated between individuals and across communities. I also employ genomic epidemiology methods to investigate drivers of viral outbreaks, which we recently applied to Zika virus in Colombia and mumps in Washington State. Finally, I have a long-term interest in the virologic and evolutionary factors that facilitate avian influenza virus host switching. I maintain the avian flu builds at nextstrain.org/flu/avian and have contributed to past and ongoing work that examines avian influenza evolution at the animal-human interface.

Characterization of 27 mumps virus genomes from the Washington state outbreak