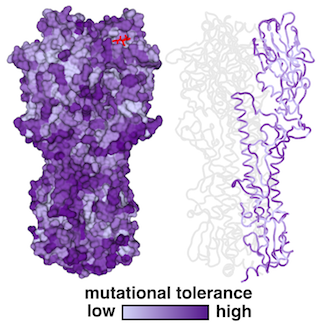 This year has made us appreciate how little we understand about seasonal H3N2 influenza despite extensive research efforts since its emergence in 1968. One unavoidable fact is that H3N2 evolves rapidly, accumulating mutations to its hemagglutinin surface protein (HA) that enable it to escape our acquired immunity from previous infections or vaccinations. Most efforts to understand HA evolution focus on mutations that increase viral fitness by enabling escape from the immune system. These escape mutations are often described in the context of a fitness trade-off with viral replication or transmission. However, there have been no systematic studies of how individual mutations to HA affect these core replicative functions of H3N2. In a recent collaboration with the Bloom lab, led by Juhye Lee, we investigated the functional effects of all possible single amino-acid mutations to the HA of a single, recent H3N2 strain.

Juhye performed deep mutational scanning experiments to quantify the effects of mutations to HA on viral growth in cell culture. These experiments measured the preferred amino acid composition at each position in HA, allowing us to calculate the fitness effect of mutations from one amino acid to another. To determine whether our measurements approximated the fitness of mutations in natural populations, we investigated the evolutionary fates of 1321 mutations in H3N2 strains sampled from 1968 to 2018. Specifically, we compared each mutation’s maximum global frequency reached in nature to its corresponding experimental mutational effect. We found that successful mutations in nature generally had neutral or beneficial experimental mutation effects, while unsuccessful mutations had deleterious mutational effects. This correlation between experimentally-measured and natural fitness effects of H3N2 mutations disappeared when we substituted our H3N2 measurements with previous measurements for a lab-adapted H1N1 strain. Indeed, we observed a significant shift in preferred amino acid compositions between H3N2 and H1N1. It is possible that this shift reflects differences between the two viral lineages in both the folding of HA and the selective pressures constraining HA evolution.

Our results suggest that experimental measurements of mutational effects in HA can help predict the evolution of seasonal influenza within a specific lineage. While these measurements do not represent the true fitness of mutations in nature, they are an important first step toward filling a gap in our understanding of H3N2 evolution. This study also prepares us for future investigations of how mutations allow viruses to escape detection by human antibodies. The combination of deep mutational scanning measurements for viral growth and immune escape should allow us to build more accurate, experimentally-informed evolutionary models for seasonal influenza.